The water line plumbing started at the tail end of the engine where the now modified water outlet pipe/thermostat housing was in place.  The idea was to take the water leaving the engine at that point through hoses and fittings and direct it straight forward to a swirlpot.  From the swirlpot the water would descend down and to the right ultimately joining up with the lower inlet for the right side radiator.

Pegasus was the source for the silicone water hoses.

The first hose, starting at the water outlet pipe was a 90 degree piece with an internal diameter of 1 and quarter inch.  The six inch legs of the piece allowed a rise of sufficient height to clear the chassis “A” brace at the rear of the motor.  Part number is E90.32-Color-6 (the color in this instance being Black).  The hose color choices are Red, Black and Blue.  This hose cost $18.49.

The next item in the assembly was an In-Line Water Temperature Gauge Adapter for the water temperature sensor.  This item is $49.99 from Pegasus.  Part number: AM2282. The beauty of this water temperature gauge adapter is that it can be inserted anywhere along the plumbing run that is best suited for any specific adaptation.

The gauge adapter is connected to an In-Line Water Filler Neck by a 1 ½ by 1 ¼ straight silicone reducer hose.  The filler neck was inserted at this point because this was going to be the highest point in the system.  The filler neck requires a 1 ½ hose while everything else on this top section is 1 ¼, hence the adapter.  Summit Racing provides the Filler Neck.  $34.97.  Part number: SME-2202.  Pegasus was able to provide the Stant Racing Radiator Cap for $19.99 (Part number 1290-Press).  The adapter hose is $12.49. Part number: SR38.32-Black.  A second adapter hose is required to drop the diameter back down to 1 1/4 (so an additional $12.49).

A length of straight 1 ¼ ID hose completes the run to the swirl pot (though I threw in an additional in-line temperature sender adaptor to provide a signal to my preferred analog gauge in the dash….solely a quirky aesthetic preference).  The Pegasus part number for the straight hose is SHS32-Black. Cost is $14.79. 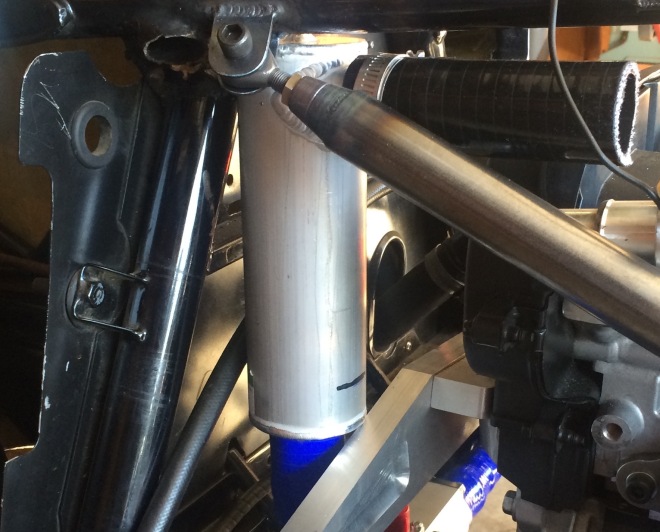 The swirlpot is a Pegasus offering. Part number OBP-WSP001. Cost is $99.99.  The 2.6 inch diameter worked out just fine.  But the 8 inch length smacked into that big upper front motor mount.  So back to Berkeley to have Dennis shorten it by an inch.

The length reduction cut and re-weld task took about half an hour.

The newly modified swirlpot fit perfectly in the desired space.

The first hose out the bottom of the swirlpot matched the 1 ¼ diameter of the swirlpot outlet pipe.  From this point, however, down to the rightside radiator, the diameters would all be 1 inch.  So this required a straight reducer hose from the 1 ¼ down to the 1 inch.  Pegasus part number is S32.25-Blue.  Cost is $11.79.

An Aluminum Hose Joiner Splicing Nipple (The 1 inch size, Pegasus part number HJ25; Cost $8.99) was used to join the reducer hose to a 1 inch diameter 45 degree hose that had six inch legs.  This hose would then join up to another 45 degree hose (also of the six-inch-leg type).  These hoses cost $18.29 each.  The part number is E45.25-Blue-6. And this would require a second splicing nipple.

I needed to redirect the straight-down-run from the swirlpot, 90 degrees to the right so as to run along the bottom of the engine bay, away from engine pulleys and belts and then out to the right side to hook up with the lower inlet pipe of the right side radiator. But going straight down and then across the bottom of the engine bay ran into the space needed for fuel lines, a fuel filter and the Bosch high pressure fuel pump. So the two 45 degree hoses, linked together, gave me the needed 90 degrees and accomplished the first requirement of clearing the belt and pulleys as well as requirement number two, that of keeping open the space for the fuel delivery necessities. 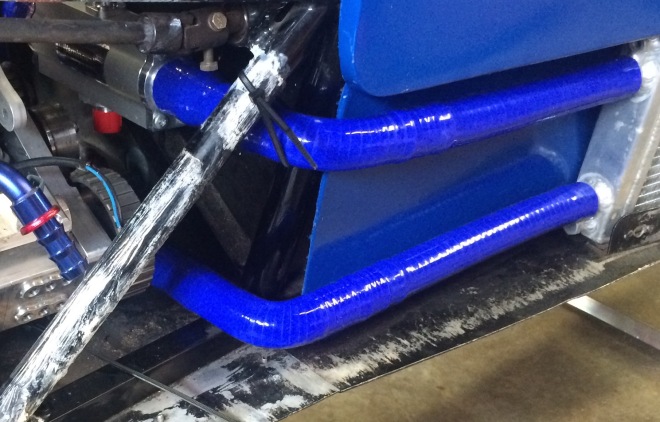 A straight section of 1 inch ID hose extends from the upper water outlet of the right side radiator and connects via another 1 inch nipple to a 90 degree section that then heads back into the engine bay area.  And at this point another nipple is used to join the 1 inch ID hose to a 1 ¼ to 1 inch adapter hose.  This adapter is needed to connect to the water pipe inlet for the Mocal Laminar Flow Oil to Water Heat Exchanger.  I’d seen this type of heat exchanger on a couple of Formula Continentals and thought it might be a nice alternative to the usual out-in-the-airstream oil cooler.  So I decided to integrate it into the cross engine bay hose run that would ultimately exit the engine bay on the left side and then connect to the left side radiator.  This heat exchanger was obtained from Racer Parts Wholesale (on line at racerpartswholesale.com or via phone at 1-800-797-7815).  I chose the medium size.  The part number is MOC-A43-180.  It cost $359.95.

A second 1 ¼ to 1 inch reducer/adapter hose is needed to transition back down from the heat exchanger to the 1 inch diameter of the hose that will connect to the upper left side radiator water pipe.  This run to the upper water pipe on the left side radiator requires, in addition to the adapter hose, a 90 degree 1 inch hose with 6 inch legs two splicing nipples and another straight length.  Part numbers as listed above. And this adds $59.05 to the water plumbing costs. 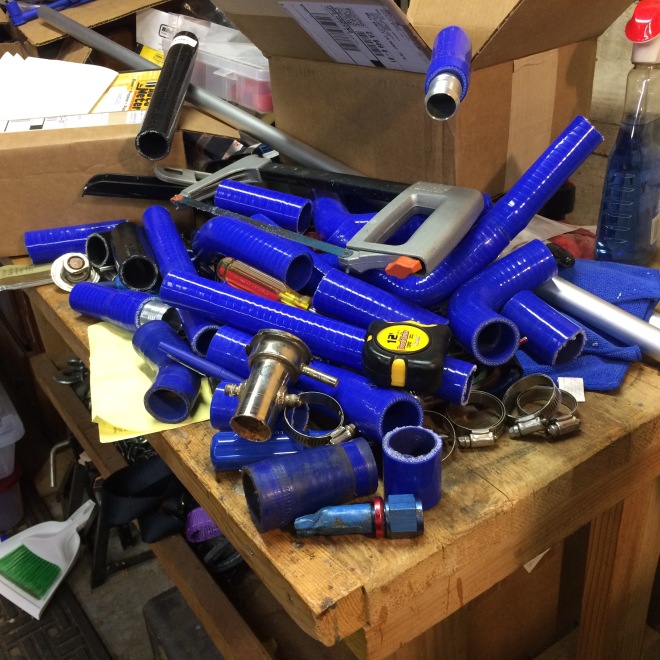 Figuring out the water plumbing runs involved considerable trial and error.  The above photo is a photographic representation of that trial and error process.  At some point, after this Zetec Chassis Conversion phase of the project is done, I’ll probably go back and recreate the water plumbing runs with as much actual metal piping as possible. That way I’ll be able to greatly reduce the need for the silicone hose, splicing nipples and hose clamps.  While Pegasus can supply the Lined Hose Clamps for Silicone Hose, they’re on the expensive side (around $2.69 or so), so the fewer the better.  And fewer spliced joints translates into fewer leaking joint opportunities.