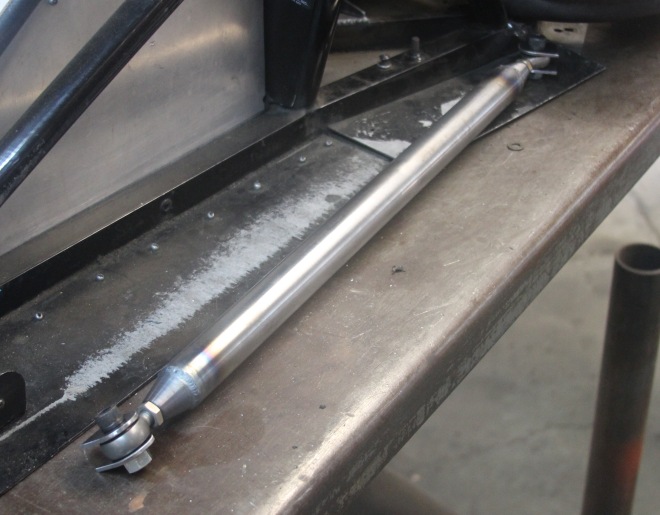 We’d removed the large diagonal brace on the top right side of the engine bay, as well as a large diagonal brace on the lower left side of the engine bay, and I was feeling a bit uncomfortable about removing that much torsional resistance and stiffness from the rearward portion of the chassis.  Yes, the Zetec engine was designed to be part of the stiffness equation as more of a stressed member.  And yes, the current crop of more recent Formula Continental/F2000 chassis, designed for the Zetec motor, have engine bays that seem to resemble a parallelogram rather than a more fully triangulated spaceframe type of structure.  Still, I was uncomfortable.  So Dennis and Dan set about to fabricate a stout brace that would run diagonally from shoulder height on the left side of the forward engine bay bulkhead descending rearward and down to the top chassis rail near where the bellhousing would bolt up to the chassis frame. 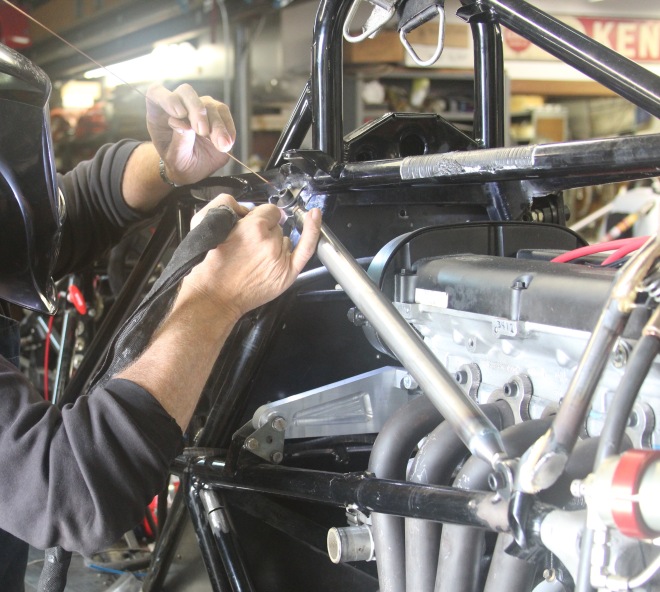 The end result was something very similar to the large diagonal brace that had been removed from the right side of the engine bay.  This brace, however, was designed to be removable should we have any difficulties inserting any subsequently desired components.  It wouldn’t hurt to have that flexibility.  And, once again, this was something that could be adapted to any of the older FC/F2000 chassis.

Dan set up the brace with rod ends of both the left and right hand thread variety so as to allow for simple length adjustments.  Tabs were fabricated, all the components were bolted together and the tabs were then welded to the engine bay frame.

The tasks took 2 and 1/2 hours to complete and I was only charged $20 for the materials.(The rod ends were apparently well used items).